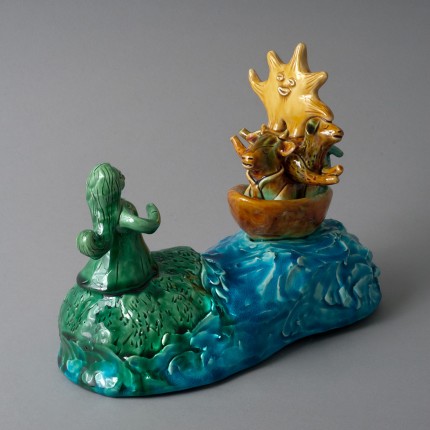 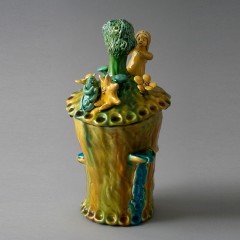 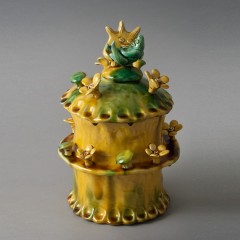 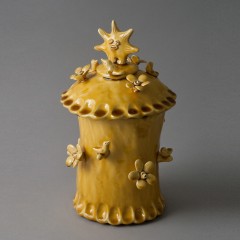 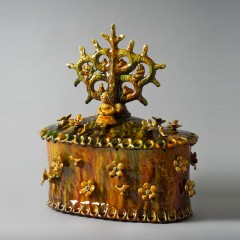 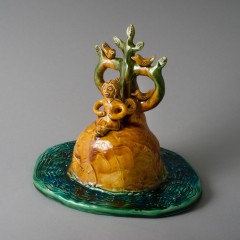 Sabbia Gallery presents this solo exhibition of ceramics from Eleni A. Holloway, the 2009 winner of the Sabbia Gallery Solo Exhibition Prize for National Art School Graduates in Ceramics.

The works in ‘Chaos and the Cosmos’ are an amalgam of my interest in ceramic and storytelling traditions, the place of mythology in Western contemporary society combined with autobiography and personal reflection. The interconnectedness of these themes was and continues to be a source of inspiration, a fascinating arena in which to grapple with those questions that are a most fundamental aspect of the human condition; how do we place ourselves?

Set in an undefined time and space, the works speak in a mythological tone and simply tell a story of the marriage of the sun and the moon and the ensuing chaos from this union. Though whimsical and humorous, the gestures, metaphors and iconography disclose hidden meanings. The allegory may be translated as my struggle to make sense in a world which often displays a lack of sense. The works constantly point to history and traditions that appear lost or clash in my contemporary experience. This is partly due to what I see as the death of mythology in the West by scientific critique, and consequently it’s having been discarded as outmoded and useless. Our cultural mythology is in a state of chaos, and this chaos is felt at an individual level; our present sense of identity is always grounded in our knowledge of the past. The works speak of something that has gone awry. My present sense of self is also rooted in the awareness of a lost heritage as a Greek-Australian and the traditions, rituals, customs and stories that feel lost to me. And so I continue to wonder, what kinds of stories should I be telling?