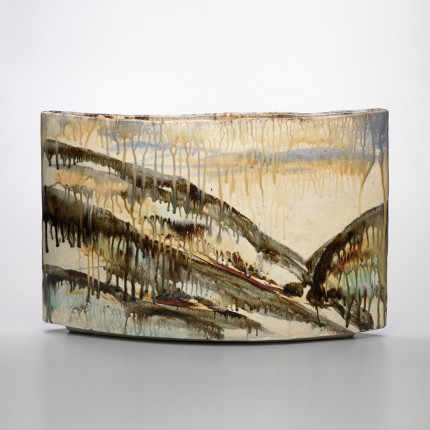 We would like to congratulate Jeffery Mincham AM, one of Australia’s finest, and Sabbia Gallery’s most highly sought after ceramic artists, on being named as one of this year’s Fleurieu Art Prize finalists. This art prize proudly boasts its…elf as being the world’s richest painting art prize, so it is quite an achievement for a ceramic artist to be included.
He is in the running for the Fleurieu Water & Environment Prize 2013 with his work ‘After Fire…….Cherryville’, 2013, inspired after a bushfire swept through his beautiful area of the Adelaide Hills a few months ago. Mincham is known worldwide for his use of his ceramic forms as a canvas to express his feelings of the Australian landscape.
The Fleurieu Art Prize festival will be held 26 October – 25 November 2013 at various venues primarly in the McLaren Vale, and Goolwa and Adelaide regions. The UK Director of Saatchi Gallery Nigel Hurst has been appointed as this year’s guest judge.
Wishing you all the best!