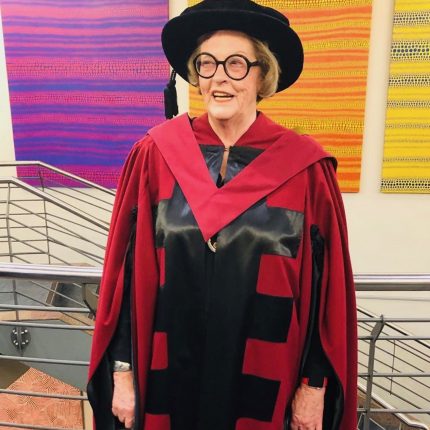 We are delighted to announce that Sabbia artist, widely acclaimed international ceramic artist and Western Australian Living Treasure, Pippin Drysdale, has been awarded an Honorary Doctorate of Arts by Curtin University.

Over a career spanning four decades, Pippin has established her place as one of Australia’s foremost ceramic artists with a superb international reputation. Her works draw inspiration from the ancient landscapes of Australia’s desert interior and are known for their intensity of colour and linear markings.

Curtin University Vice-Chancellor Professor Deborah Terry said she was delighted to announce Ms Drysdale had been awarded an Honorary Doctorate of Arts for her significant contribution and commitment to her craft, as well as her work in developing the Western Australian arts community.

“Ms Drysdale is one of Australia’s most prolific and well-regarded ceramicists, who has been lauded for her careful and sophisticated approach in creating what are often described as ‘ three dimensional paintings’ that reflect the power and beauty of Australian landscapes,” Professor Terry said.

“From her studio in Fremantle, Ms Drysdale has managed to have a national and international impact through her work which has been featured in more than 450 exhibitions around the world and takes pride of place in many public and private collections.

“Over the past 40 years, Ms Drysdale has travelled the world sharing her passion, skills and knowledge in ceramic art and has been awarded many accolades, including recognition as one of Western Australia’s Living Treasures and as a Master of Australian Craft. She is a very worthy recipient of Curtin’s Honorary Doctorate of Arts.”

Pippin’s most recent collection, Devil’s Marbles, was shown at the John Curtin Gallery in the highly acclaimed Confluence exhibition together with her long-time collaborator Warrick Palmateer. The works were inspired by the ancient rock formations in the sacred Karlu Karlu Aboriginal site in the Northern Territory.

She has also held numerous residencies at prestigious institutions, representing Australia at the International Lustre Symposium in Italy, as the Artist in Residence at the Banff Centre for the Arts and at the New York City Department of Cultural Affairs.

Pippin is a Curtin alumna who holds a Bachelor of Fine Arts. She was awarded her Honorary Doctorate of Arts at a graduation ceremony on February 8.

PIPPIN WILL BE HOLDING HER NEXT SOLO EXHIBITION ‘BREAKAWAY COUNTRY’ AT SABBIA GALLERY SYDNEY FROM 22 JULY TO 15 AUGUST 2020.

ALL ENQUIRIES TO THE DIRECTOR ANNA GRIGSON