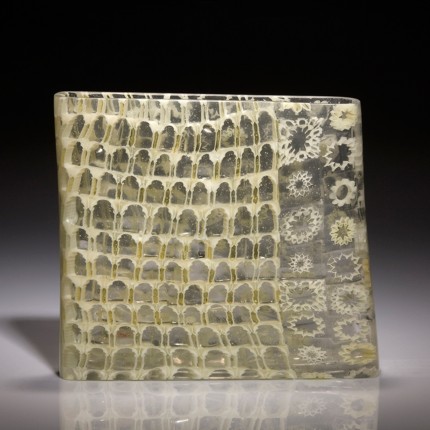 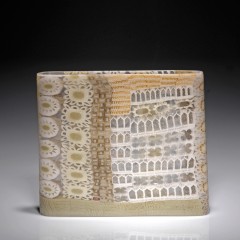 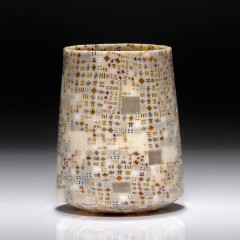 Now based in Adelaide but having spent a decade overseas fine-tuning his craft, Giles is known for his contemporary use of the traditional murrini glass technique that originated in Venice. By creating long rods of glass that are then cut into small tiles to reveal the pattern when cut in cross sections, they are then constructed into intricate patterns like a mosaic. Once a suitable pattern has been created on a flat sheet, this is then fused and blown into a three-dimensional form. Murrini is an extremely labour intensive and delicate technique few worldwide have excelled in.

Giles has been particularly drawn to the iconic island of Murano in Venice. Like his contemporaries in glass, this area has constantly fascinated him, and he began researching the glass-making traditions of this famous island and the lesser known nearby island of Burano, known for its intricate lace-making tradition.

He says ‘it was partly instinct to pursue the lace-glass connection, but it also built on my interest in the cross-pollination of ideas between different people living in the same region and involved in small manufacturing and craft practices. Looking at similarities of patterning, it is clear that there has been a vital exchange of ideas between all the people living in the Venice lagoon for centuries.’

Having spent decades exploring and compiling glass in small pieces, it was only natural that he would gravitate towards textile elements such as lace, as the premise and construct of the techniques are the same. By making lots of small elements that are constructed to make a whole, the depth of the pattern can only ever be as intricate as the makers ability, and Giles is known internationally as a master in this technique. By making use of modern day materials such as the Bullseye brand glass stock and electric kilns, he has been able to take the technique further and more intricate than his predecessors ever imagined.