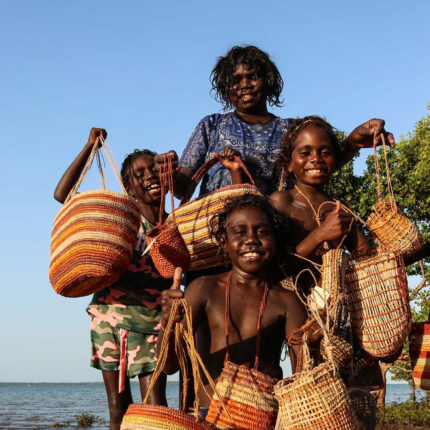 Milingimbi Art and Culture is an Indigenous-owned, non-profit corporation which supports Yolŋu culture and sustainable livelihoods for artists on the island of Yurrwi (Milingimbi), in North East Arnhem Land. It is a social, cultural and economic hub for our community. Milingimbi Art provides income for many families living on Milingimbi and its regional homelands and supports Yolŋu from over 12 language groups.

In Yolŋu culture the land, sea, ceremony, song, Law and clan designs are inseparable. Milingimbi artists share these inter-connections through the designs, materials and stories used in our distinctive woven, painted and carved artworks.

Ethnographic objects from Milingimbi were first acquired as early as 1912, with material culture being more systematically collected from the 1920s following the arrival of the first missionaries.  By the 1960s the centre was well established as a fertile source of traditional Yolŋu art for national and international collections. Milingimbi artworks are recognised widely for their artistic integrity and cultural significance.

Milingimbi Art and Culture supports the sharing of ceremonial knowledge across generations through its programs and community partnerships.

Sabbia will be presenting a beautiful curated exhibition of new works by selected artists in fibre, on bark, wood and canvas. This exhibition with run in conjunction with Milingimbi’s presentation at the launch of Sydney Modern at AGNSW Sydney. Further details to come