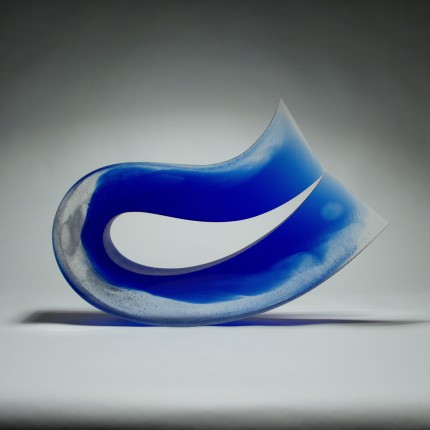 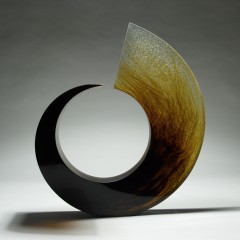 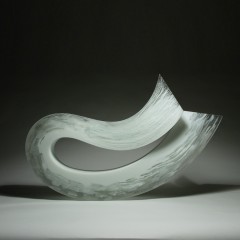 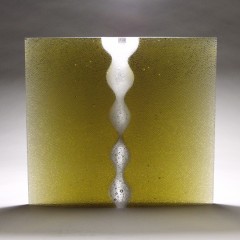 Known for her dramatic cast-glass sculptures, British-born Galia Amsel is one of the leading contemporary glass artists presently working in New Zealand. A graduate of the Royal College of Art in London, Amsel relocated to New Zealand in 2003. She is recognised for her highly developed understanding of glass, with a visual language uniquely her own.

Amsel’s sculpture revolves around the central paradox of glass as both a fluid and a solid medium. Through shape, translucence, texture and colour, she conveys her underlying interest in movement, tension and balance. Her resulting works manage both drama and subtlety, carrying an overwhelming sense of an artist deeply engaged with her medium.

Central to Amsel’s work is a sweeping, circular form, which often transitions from dark to light, or opaque to translucent. This circle represents a cycle – the passage of time captured through light, colour and pattern. In this exhibition, works such as Rekindle and Happen are meditations on this passing time, evoking the cyclical nature of a changing season or the rise and fall of the sun. Graduated opacity and colour are increasingly prominent in these works, bringing with them a poetic sense of emerging from darkness into the light. The landscape and environment have also become a reoccurring theme of Amsel’s work; drawing the circle into a more elongated format and using colour and movement to create an atmospheric sense of time and place.

In parallel to these series’, Amsel has always pursued an interest in structural, architectural forms. In contrast to her gentle, curving forms, the hard-edged geometry of these shapes address an alternative set of artistic concerns. Over the past year however, Amsel has been developing a new series that unites these two elements of her practice.

The initial works in this series, which include Embrace, Sense and Give, reveal a new depth to Amsel’s approach. These works use colour, light and layering in a more sensory way, connecting to emotional rather than physical experience. More introspective than previous works, the success of these sculptures hinge on an ability to control the nuances of colour and depth. Challenging both technically and conceptually, these works show great promise for a new direction in Amsel’s practice.