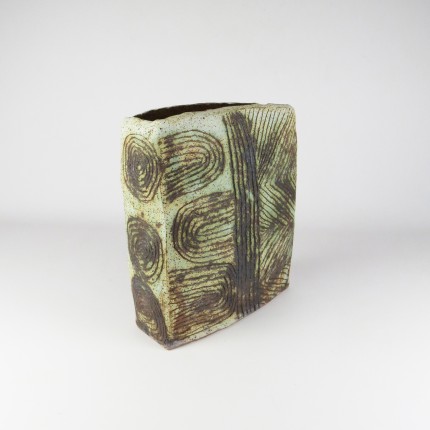 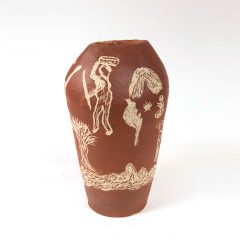 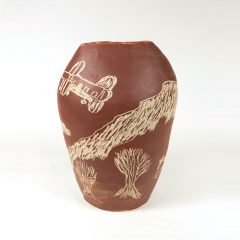 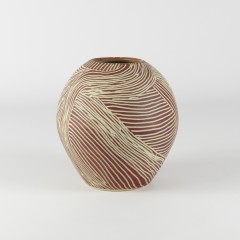 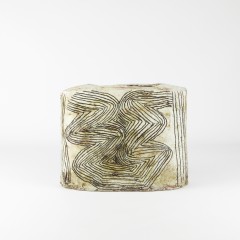 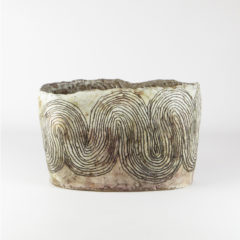 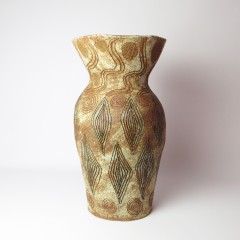 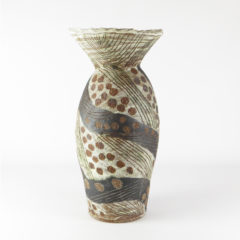 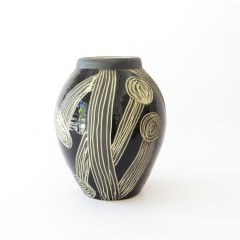 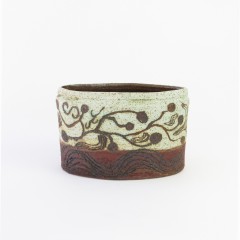 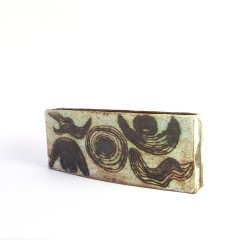 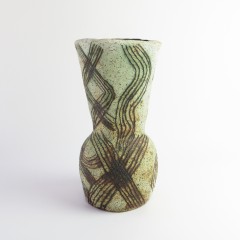 “Jack’s enigmatic pots use the clay surface as the palimpsest upon which to place his unique take on the traditional stories and legends from his community at Ernabella.” (Glenn Barkley, 2016)

Rupert Jack is a senior Pitjantjatjara artist at Ernabella Arts working between the painting and ceramics studios. He is also the community pastor. He lives between his homeland, a place named Racecourse, and Ernabella (Pukatja) community.

He is renowned for his striking hand-built forms that speak of his country, law and faith. His work depicts the maku (witchetty grub), tjala (honey ants), ili (bush fig), kaltu kaltu (bush seed that is ground into a flour to make a kind of damper and also Rupert’s father’s name) and ngata (bush berry) dreamings, as well as biblical stories of Moses and Abraham.

Informed by his knowledge of both traditional stories and the bible his work often draws connections between the two. Interestingly he employs the same visual language and iconography to depict both themes.
In 2016 Rupert was featured in the Australian Biennale of Ceramics, curated by Glenn Barkley. In the catalogue Barkley described Rupert’s work as celebrating “clay’s talismanic potential.” In 2017 Rupert continued to develop his ceramic practice, exhibiting works at Alcaston Gallery, Araluen Art Centre, Sturt Gallery and Harvey Arts (USA). He was also a finalist in the 2017 Muswellbrook Ceramic Prize. Rupert’s art has been acquired by the National Museum of Australia and ArtBank. In 2017 Rupert also featured in Clay Stories: Contemporary Indigenous ceramics from remote Australia at JamFactory presented by Sabbia Gallery, Sydney for Tarnanthi: Festival of Contemporary Aboriginal and Torres Strait Islander art. Clay Stories toured to regional galleries throughout 2018 and 2019.

I was born in Mimili in 1951. I was still a little baby when I moved to Kenmore with my father and mother. My father worked for whitefellas digging wells and anything else. I stayed in Kenmore until I was a man. Then I moved to Ernabella for marriage. I have been a pastor for over twenty years. I spent a long time travelling around, everywhere, Western Australia, Northern Territory, working for the church. Talking and singing, inma. I still know traditional tjukurpa. These are good stories for Anangu. They show you how to look after people.

A story about Maku (witchetty grub) is as vast and winding as their tracks depicted in my artwork.  It’s a story that I need to hold onto, to keep it safe. It’s important for me to keep some of these stories a secret, so I will tell a safe version that isn’t dangerous for you to hear. I will tell it from another perspective. I’ll be smart about it!!
These important stories like this Maku Tjukurpa inform my artwork and help Anangu to understand our history.  Maku is important for Anangu as a source of good food and also shows us an example of how beings can evolve and grow in positive ways. If the Maku travel underground for a long time they eventually make it out of the root systems of those trees and grow Nyalpi (wings) and start a new way of being. They evolve. They shed their old ways and become new again.
As a pastor, I can see strong connections between our Tjukurpa and the Bible. Long before Jesus, there was Tjukurpa and God together. I can see that God was always with us, in our stories; Jesus came later. I am trying to pass all this knowledge on to our young people to keep our stories alive. We need to hold on tight to Tjukurpa; to keep it safe.