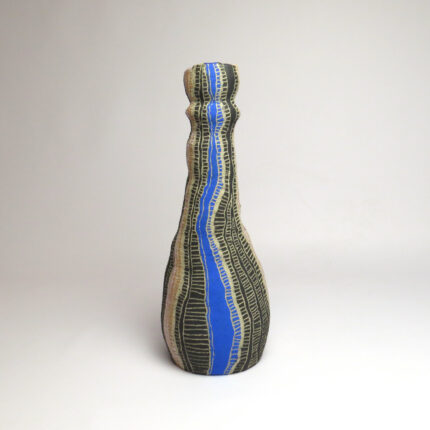 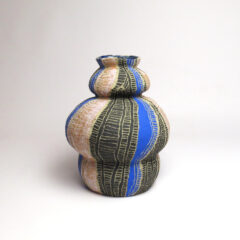 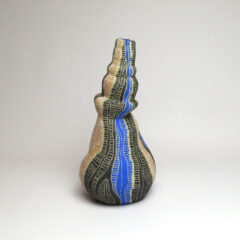 Alfred Lowe is an Arrernte person from Snake Well in the central desert, north of Alice Springs. Alfred grew up in Alice Springs and completed his schooling there, moving to Adelaide in 2014 to pursue university studies. Alfred still resides in Adelaide and started making ceramics in early 2021. He now practices daily at the APY Studio in Adelaide.

Alfred uses clay/ceramics to explore themes of Country using form and texture informed by his intimate knowledge of the central desert landscape. He hand builds forms, creating organic vessels, and applies underglazes and a range of mark-making to the surface.

Alfred’s interest in fine arts is heavily influenced and inspired by his upbringing. Late in Clifford Possum’s career, he was Alfred’s neighbour and Alfred recalls standing on truck tyres to peer over the fence and watch Clifford paint for hours at a time. He also lived opposite Araluen Arts and Cultural Precinct and spent a significant amount of time there as a child/teen.

Central Australia is a politically and racially charged region and this has fuelled Alfred’s keen interest in politics and racial justice. In particular how culture and identity are navigated and manifested in modern times. Alfred knows these themes are underlying in his work; as an early career artist he is still examining how these influences and experiences are reflected in his artistic practice.